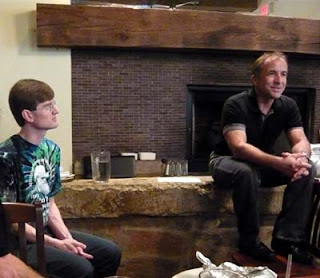 Michael Shermer, founder of the Skeptics Society, and author of popular science books, came to Austin to participate in a debate about evolution and intelligent design with representatives of Reason to Believe (a science-faith think tank). Earlier that day Center For Inquiry hosted a lunch with Shermer at NXNW.

I didn't go to the debate -- I'm one of those people who think, why does this question need to be debated at all? Evolution is an established fact in biology, but those who don't believe it are not known to change their minds in the presence of evidence. Who could possibly expect them to change their minds based on this discussion? I didn't see what I would get out of this, so I didn't go. Plenty of people from Austin's atheist and freethought communities did, though.

Earlier that day Center For Inquiry Austin hosted a lunch for Shermer at NXNW. We chatted about all sorts of things. This debate was going to be different than typical evolution vs. intelligent design debates, he said. His religionist opponents were not going to argue creationism from biological point of view. This wasn't going to be about how bacterial flagellum demonstrated irreducible complexity. This debate was going to be about the Bible. The opponents are a brand of believers who look for scientific evidence in the Bible. They pick quotes from the scripture and reinterpret them in such a way as to fit modern science. Here I asked Shermer, why can't those people find evidence for evolution in the Bible? He just smiled politely. Thus, tonight's debate was going to be more showmanship than intellectual discussion, he said. Both sides will compete who knows the Bible better -- and Shermer, according to him, knows it very well. He enjoys this kind of competition.

He has written quite a few popular science books, but he also wants to try his hand at science fiction. He has an idea for a novel about a colony set on Mars, which was founded by astronauts who were all atheists. They didn't raise their children religiously. Will religion come back spontaneously in this society? That's an important question Shermer would like to address in this novel. He believes it will, as religion is too fundamental to human thinking. This book would also explore such political questions as whether government is necessary to a society, or if all institutions should be private.

Shermer would like to do as Carl Sagan did in "Contact", that is to use plot and characters as vehicles to convey his ideas. He admitted he's not so good at character development. I was excited to hear that: as an aspiring science fiction writer, I know how hard it is to write believable characters. So I told him. Shermer was nice enough to ask me what authors he should read so as to learn to write in this genre. I suggested starting with classics, like Arthur Clarke and Isaac Asimov; then backpedalled: after all, those two writers were not good at developing fully fledged, realistic characters, so they are not the best to learn from.

Shermer came across as a warm and down-to-Earth guy. He shared food with people, who in turn enthusiastically offered him bites of their dishes. And he even stole a fry from somebody's plate. :-)

Pictures from lunch can be found in my photo gallery.

Bookmark This on Delicious
Posted by Elze at 10:46 AM No comments:

I haven't had anything all that great to blog about lately -- overwhelmed with work and personal life, I'm reading only the minimal amount of news, my usual source of inspiration. Even though SXSW was more than a month ago, it caused me to fall so far behind blogs and news, I'm only now catching up. So here's an item from a while back for your mild amusement. I saw this flyer at the First Unitarian Universalist Church of Austin, where I was for Darwin Day in February. When life gives you a dubious acronym, these people really know how to make an acro-lemonade! "FUUCA" is only mildly suggestive, so the good church folks came up with a youth group acronym that, ahem, goes all the way. :-)

I wasn't planning to weigh in on this, since I typically stay out of blogosphere debacles. But this issue hit close to home, and I already managed to get involved in a low-grade flame war on Facebook. So I thought I might as well make it a blog post.

Bruce Sterling and his Serbian wife Jasmina Tesanovic have found themselves in trouble with US immigration. As Sterling says in his blog on Wired.com, US immigration officials don't believe his marriage is valid, as they can't find any "paper trail" for it. "We have no joint bank account, no insurance accounts and no joint children," says Sterling. "The authorities therefore suspect that our marriage is a phony "Green Card marriage," and they would like to have Jasmina deported from the USA."

That's a bad situation to be in, as I can testify from my first-hand acquaintance with US immigration policies and procedures. Before I got my legal permanent residence (a.k.a green card) through a marriage to a US citizen, I spent 5 years unsuccessfully trying to get it through my employer, and failed because my company didn't comply with arcane immigration laws. So I know what it's like to battle immigration authorities.

Immigration through marriage: not that complicated

Compared to that, immigration requirements for obtaining a green card through marriage are quite easy to meet (as long as the marriage really is genuine), even though it can be tedious and time consuming to gather all the documentation. Basically, the couple needs to present evidence that their marriage is valid. This is to prevent immigration fraud via fake marriages. The evidence is simple and commonplace: joint bank accounts; rent or mortgage statements showing that both people live at the same address; joint health insurance. The kind of stuff that happens naturally to couples that are legitimately married. Apparently, Bruce and Jasmina don't have any of that.

The thing is, it's hard to claim you didn't know that such evidence will be required to prove validity of your marriage. When you apply for legal permanent residence, the forms state what kind of supporting evidence you need to submit. You can't possibly miss it, unless you willfully disregard it. I don't know how Bruce and Jasmina managed to stay ignorant of this requirement.

There is an interesting aspect to their predicament, though. As Sterling says, the reason they don't have that much evidence is that "we're an Internet couple. "By our nature, we just don't generate much paper. We use electronic banking. Bruce uses American banks, while Jasmina uses Serbian banks. [...] No sane European would ever want American health insurance. And so forth." Valid points. The evidence readily recognized by US immigration officials is the kind that's generated by an average working bee, such as myself. Typical married couples do have joint bank accounts, rent / mortgage statements and health insurance. But I imagine if you are a globe-trotting freelancing visionary / futurist / political activist, you may not be tied to something so mundane. And yet, since Bruce and Jasmina have a residence in the US, it certainly should have been possible to list that residence in both of their names. As to Bruce's question "why would anyone want to make his or her alien spouse use an American or Serbian bank?" -- there are good reasons for the foreign spouse to do it on their own will (who's saying anything about "making"?) When you are withdrawing money from a local bank's ATM, you don't have to pay a fee, whereas if you use this ATM to withdraw money from another bank, there is a fee. If you withdraw often (and don't tell me that an "internet couple" never needs cash! :-)), those fees can add up. And even if you do all your banking transactions over the internet, you can still download and print paper statements. So this really isn't about electronic vs. paper problem. It's just that the couple has not bothered to establish enough evidence of a joint life -- even though they should have known better.

As I said, I do sympathize with them, and I hope the solution they are seeking -- to have lots of people sign affidavits that they've met Bruce and Jasmina and recognized them as a genuine couple -- will be sufficient to USCIS. And it's a good thing that people on social networks have started circulating a petition to help Bruce and Jasmina. However... What really got my goat is that it's being phrased as a plea to "defend" Bruce and Jasmina from the claws of Homeland Security. That's victim language. The only victimization here was done by the couple to themselves, through their own negligence. Some people are going so far as to claim it's a witch hunt against Jasmina because of her political activism. Anyone who's dealt with US immigration laws like I have, will recognize that as absurd.

What it's really like to be destroyed by US immigration machine

If you want to know what it's really like to be victimized by US immigration authorities, you need to go no further than to read the archives of a Yahoo group immigration_info. Admittedly, you may have to read several years of archives to get to the truly hair-raising stories; the most egregious cases of victimization are not posted very often on internet message boards. But when you do come across them, they'll make your blood boil. There's a story of a woman who was a child when her parents brought her illegally into the US; they eventually applied and got green cards for themselves, but out of ignorance or negligence they didn't apply for her green card. Now in her 30s, she is facing deportation from the only country she's ever known. And there's nothing she could have ever done about it: she had no say in her parents' decision to come into US illegally, or in their negligence to apply for her green card. There's also a refugee from Myanmar who applied for political asylum in the US, and then risked his life for a brief visit back to Myanmar to say goodbye to his dying mother. Now US authorities are denying his asylum petition, because, according to their logic, "if you could go back to your country to visit, then your life is really not under threat"!

I sincerely hope thing will work out for Bruce and Jasmina. Given the internet uproar their plea will generate, I can't imagine it not working out... unlike for those above-mentioned poor chumps who got in trouble through no fault of their own, and who don't have internet groundswell behind them.

Bookmark This on Delicious
Posted by Elze at 3:21 PM 2 comments: